OMPA is capable of characterising the thickness, uniformity and alignment quality over a large area of a liquid crystal cell. This can be done for cells with symmetric and asymmetric design, where two substrates have different alignment layers. The figures shown demonstrate the measurement of the cell thickness and the pretilt angle in a symmetric cell containing two PI alignment layers and an asymmetric cell containing PI and azobenzene based photoalignment PAAD layers. Mapping cell thickness and pretilt angles When liquid crystal devices and displays are produced on an industrial scale, their uniformity and quality of alignment is checked with specialised equipment. However, R&D in liquid crystals often involves exploring new cell design, new liquid crystals, substrates, aligning layers or electrode geometries. The successful development of such prototypes requires compact and fast method to characterise the whole area of liquid crystal cells that are in the early stages of development.

A simple but reliable characterisation technique becomes more difficult for device prototypes with complex designs. Some new liquid crystal devices have an asymmetric structure, where the liquid crystal layer is in contact with substrates that are made of different materials or have different alignment layers deposited on them. It is not straightforward to characterise such cells with standards methods.

We have developed a numerical model and fitting algorithms that can analyse symmetric and asymmetric cells, measuring the pretilt angle and the anchoring energy. The OMPA capability to characterise symmetric and asymmetric cells is demonstrated in the two examples on the right. As a symmetric cell, we chose a cell consisting of a nematic liquid crystal layer (E7) between two glass substrates coated with ITO conductive layers and with rubbed polyimide (PI). For reliability, the asymmetric cell also contains a nematic E7 layer and rubbed PI as one of the alignment layers. The other alignment layer was a photo-aligning azobenzene dye (PAAD-22D) provided by the Beam Co. 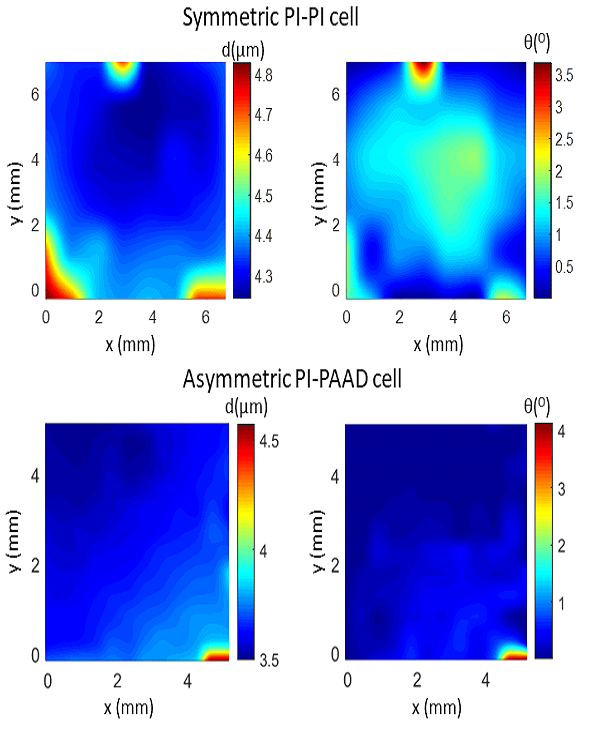 Evaluating anchoring energy with OMPA is straightforward. It does not require any additional liquid crystal samples. Moreover, the evaluation of the anchoring energy does not require any additional measurement steps, as it is a part of fitting algorithm that analyses the data used to find other liquid crystal parameters, such as elastic constants, cell thickness and pretilt.

For demonstration, we selected a liquid crystal cell containing a layer of LC QYTN between two layers of P3HT. From our previous experience we knew that P3HT induced planar alignment of the liquid crystal, but the anchoring strength was unknown. The figure on the left shows an experimental crossed-polarised intensity trace (cyan circles) and two best-fit curves, one assuming that the anchoring is infinitely strong and one using the anchoring energy as a fitting parameter. Only the latter case gives a good fit providing an estimate of the anchoring energy of 2×10-4 J/m2. 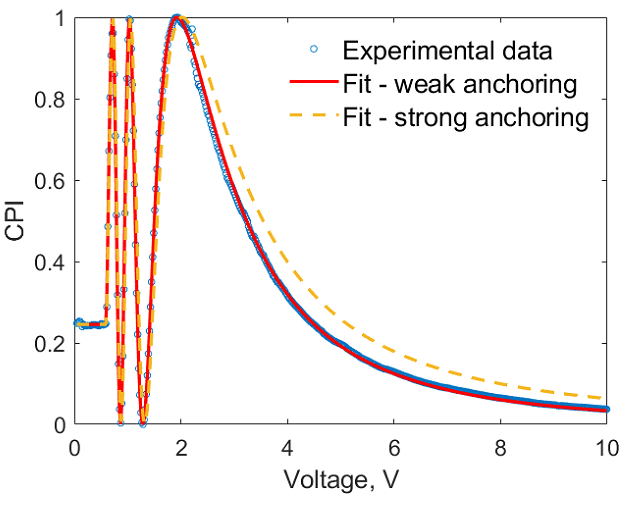 We demonstrate here a successful application of OMPA for characterisation of standard nematic and liquid crystals dopes with ferroelectric nanoparticles. We investigated two mixtures: LC18523 with 1%wt. of BaTiO3 (BTO) (nanoparticle size 15 nm) and LC18523 with 1%wt. of Sn2P2S6 (SPS) (nanoparticle size 50 nm). Both types of nanoparticles were prepared by milling micron sized particles together with a surfactant (oleic acid) and transferred to the LC through an intermediate solvent. Planar cells with good quality were used for OMPA measurements. The figure on the right displays cross-polarised intensity measurements for pure and doped LC18523 highlighting that it is possible to obtain good quality fits for both.

For a demonstration purpose, we selected a widely used and well characterised liquid crystal E7. The rotational viscosity was measured in a temperature range between 25oC and 50oC, as demonstrated in the following summary plot, accompanied by a fitting function. 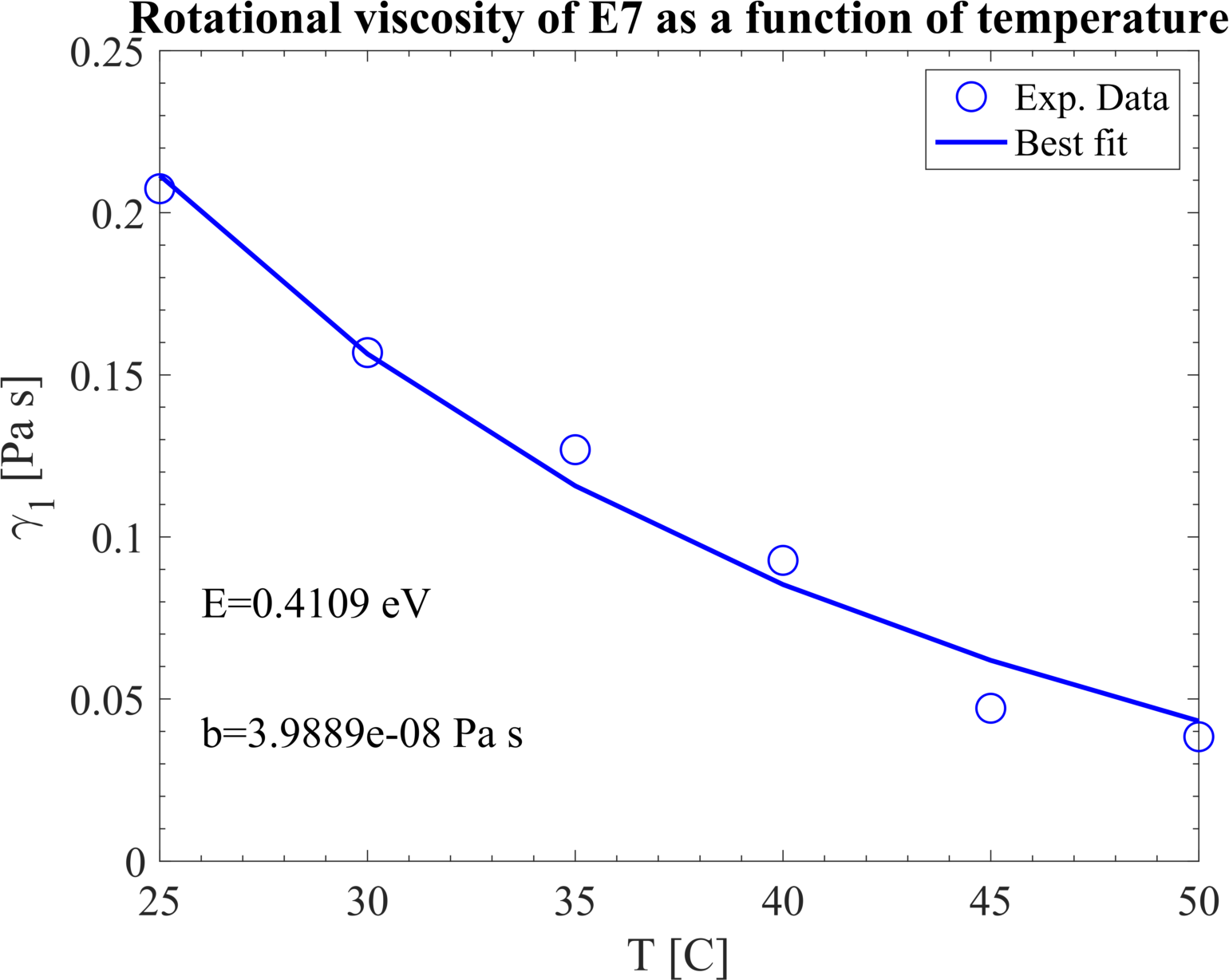 Want to ask a question?

Send us an email at: sopht-lc@soton.ac.uk